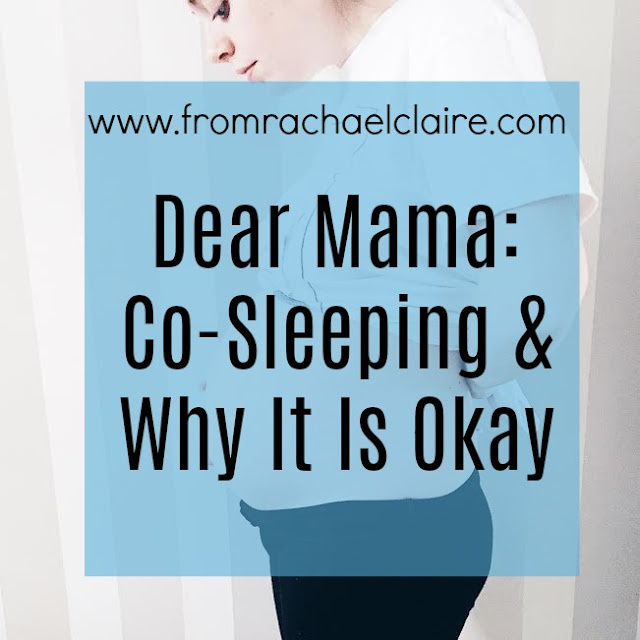 Co-sleeping isn’t something I really looked into when I was pregnant. I didn’t understand people that co-slept. Babies sleep in their moses baskets or cribs at night don’t they? Babies will fall asleep wherever you put them, right? Nah. They really don’t. They may be tiny but newborn babies know EXACTLY where they want to sleep and if that’s in their designated space, good for you. In a lot of cases however, it’s right next to mama. And by right next to, I mean literally RIGHT next to you.
We were in hospital for two nights after I had Teddy & both those nights, he slept quite happily in his little rocking crib next to my bed, swaddled up to his baby blue eye balls, happy as larry. I’m sure he lured me into a false sense of security on purpose…
I remember on our second night, a midwife insisted I get some sleep and lay Teddy next to me, latched him on for me and let us sleep for a couple of hours, however when we got home, I knew i’d be too terrified to try it without a midwife there to check on us, so pushed it to the back of my mind.
When we got home however, would he settle in his moses basket or crib at night time? Would he fuck! I put it down It’s to cluster feeding and figured he just needed to sort my supply out and we’d be laughing. Those first two weeks were horrendous, not just for the constant nightly feeds but for the fact he wouldn’t sleep anywhere but my arms until around 5 in the morning where he would pass out on our bed. I was so terrified of falling asleep with him in my arms that I would stay awake all night. If I tried to put him down, he screamed bloody murder and we’d end up having to pace the house to try & get him to calm down.
I told my Sister & Mummy Club (A whatsapp group i’m in with three fellow boy mamas) about it & didn’t know what the fuck I would do. They all recommended co-sleeping, sending me articles that sang it’s praises and sharing tips on how it works and how to do it safely. I read everything I could that day and under Aaron’s watchful eye, Teddy & I lay down in bed after his feed and slept. He slept for three hours that night before waking up! I couldn’t believe it. We haven’t looked back since. I remember when Teddy was about a month old and when people asked how he slept (because they need to know, obviously…) & I told them he slept really well. They then acted shocked and asked where he slept, ready for their judgy eyes but also not caring “Oh he sleeps in bed with us”. Cue the gasps and oh my god really? Are you not scared of squishing him? or my absolute favourite “oh, you’re making a rod for your own back.” Fuck off Sandra. I like my back & my rod.
People can’t seem to understand that babies sometimes, just want their mamas. Their smell, warmth and comfort. If Teddy needs me to sleep peacefully, to feel safe and secure, then that’s what I am going to do. It’s part of my job as his mummy. It’s also really practical as I am breastfeeding and can just whip my boob out, lie down and feed him.
Teddy does sometimes sleep in his crib now and that’s brilliant but I love that at around 5 in the morning he will come in bed with us. If one night he decides he doesn’t want to go in his crib, rather than forcing him, I bring him straight in bed with us. I actually feel sad for the day when he’ll no longer want to sleep with us.
If I am making a rod for my own back by letting my baby be close to me, then good! I can 100% say that I will definitely co-sleep with our next baby,  without a second thought. As long as you are doing it safely, I honestly think it’s such a lovely thing to do! I really feel there needs to be more advice and support when it comes to co-sleeping! Rather than the health visitors making you feel like you are doing something wrong, they should support your decision & show you how to do it safely, share advice or tips. They lead you to believe that all babies will sleep independently when that isn’t the case!

“I bought a cot & a flipping expensive mattress for my first baby. Co-sleeping didn’t even occur to me. I was a single teenage mum at the time & looking after a constantly hungry, colicky newborn who HATED the cot, was difficult to say the least. She would only settle next to me and would get so upset in the cot. After many sleepless nights I started to bring her into my bed at 4am everyday and she settled almost immediately. She was a different baby, calm, content and happy! That progressed into us co-sleeping full time from about 6 months. Breastfeeding was so much easier and we both got more sleep. With my second baby I bought the cute swinging cribs and moses basket which I knew I probably wouldn’t use. We co-slept from birth, even in the hospital bed. I dread to think how little sleep I would be getting if I didn’t co-sleep. I am able to feed Lily lay down and she can help herself whenever she pleases. Co-sleeping just seems normal to us now.”– Gee from Gee Gardner.
“I co-slept when my daughter was small & had reflux, however my husband would be awake to make sure we were sleeping safely. I waited 7 years for my daughter and so much anxiety around possible accidents so this was best for us” Katy from Katy Kicker.
“We co-slept with two out of our three kids & still do with the almost 3 year old most nights but I wouldn’t change it at all. I love them snuggling up to us!” Rachel from Coffee, Cake, Kids.
“My son suffers from colic and some digestive problems & although I never intended to co-sleep, we find that it really settles him. I agonized over it after being repeatedly told not to by health professionals, but I also researched a lot of positive (and safe) ways to co-sleep online.” Christy from Welsh Mum.
“We co-slept from birth and although she mostly stays in her own room now, we still do occasionally now at nearly 20 months old. For us it made sense; she wanted to be close to us, i’ve done alot of research into co-sleeping and appreciate the benefits it can give. Plus, I love the closeness and bond it gives us! We’ll definitely co-sleep next time we have a baby too” Sophia from Tattooed Tea Lady.
“We still co-sleep with our two year old. We believe that night-time is our most important parenting role- our love and attention doesn’t stop because it’s nighttime. I want our daughter to always feel comfortable coming into our bed.”- Catherine from Mama Cat & Baby Bee.
“We co-slept with Zach for a period of time because it was the only way we actually got any sleep at all. He stopped himself from 6 months and from then slept in his cot. Oscar is almost 1 and still ends up in our bed every night. By a certain point in the evening he just point blank refuses to go back in his cot and i’m too tired to keep trying!” Lisa from Mumma Scribbles.
“We co-slept with our daughter for about 16 months on & off. I was really ill after her birth and her reflux made it hard for her to get to sleep. When we were both better, we loved the cuddles so much we didn’t stop. I loved the bond it gave us.” Lyndsey from Me, Him, The Dog & A Baby.
“When I was pregnant I thought i’d have my baby in their own room early and be super strict with the ‘rules’. NOPE! 5.5 years later, 2 children and we still co-sleep. In fact we went one step further & had a giant bed made, have a family room, with our 5 year old in his own bed but still with us. It’s the best thing we ever did!” Hayley from I Am River.
“I still co-sleep with my nearly 4 year old. We always have done, with an Ikea cot sidecarred to the bed for extra room. It’s just the two of us at home & I think it’s pretty natural as humans to prefer to sleep together. Cuddling up to him at night is so lovely.” Lauren from Dilan And Me.
“I co-slept with my now 2.5 year old from him being 5 months to 18 months. He was an absolutely terrible sleeper so this was initially just a way to make the night times easier for me, but the cuddles were an amazing bonus. My youngest son is 6 months now and is a much better sleeper. He goes from 7pm until 4am in his cot, then after his 4am feed he’ll come into bed with me. It works well for us!” Stacey from One Small Human.

“When I had Robin I didn’t plan on co sleeping at all, my other two had been wonderful sleepers as babies and I hoped she would be the same, I was of course wrong on all counts! I almost wish I got one of those Next To Me cribs.. She was born a tiny 5lbs 8 and I was frightened that I would roll over and hurt her, so she slept on my chest which, as she has gotten older continues to do so, she’s just a lot heavier now! Co sleeping sort of worked for us, it did mean that she would usually go back to sleep and we would also sleep a little longer in the mornings, but I also loved the cuddles, her little fluffy hair just under my chin and her warmth. I just need to remember to prepare to co sleep again with future babies.”– Sarah from Mummy Cat Notes.

How I Feel About My Post-Partum Body.

Creating A Logo With Logojoy & An Exciting Announcement!