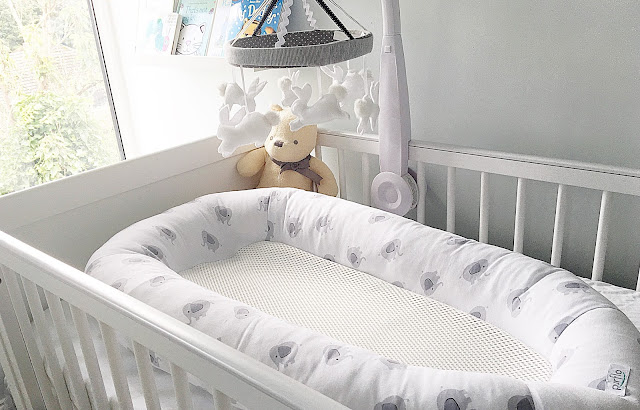 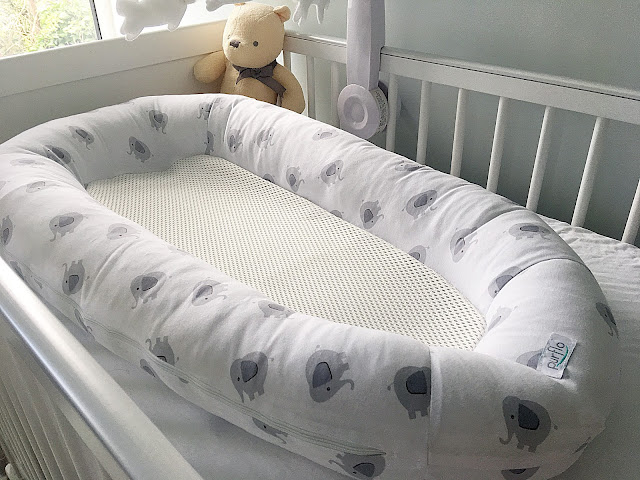 Before Teddy arrived I naively thought that babies slept wherever they were put. Moses baskets, cots, cribs..I just presumed that with the whole ‘all babies do is sleep’ statement, that meant that they would sleep anywhere. Oh how wrong was I! From not sleeping at all unless in my arms, to co-sleeping next to me, to FINALLY settling in his crib. All thanks to the Purflo Breathable Nest.

The two nights we spent in the hospital, he slept happily in his little rocking crib they provide, swaddled up nice & cosy. Easy, I thought, when we get home he’ll sleep in his moses basket downstairs and his crib upstairs, in our room. Silly Mummy. I tried every night for two weeks to get him to sleep in his crib or moses basket at night and he was just not having it. He would fall asleep on me after feeding, but as soon as we tried putting him down he would throw himself awake and scream bloody murder. He fed & cried constantly until around 4 or 5 in the morning, where he would pass out in our bed for a few hours. We walked around the house, swaddled him, played white noise.. you name it, we tried it. Some nights I would go downstairs with him and watch telly in the dark whilst trying not to nod off, just so at least Aaron could get some sleep. I didn’t see the point in us both being exhausted and since I was (and still am) exclusively breastfeeding it was pretty much all down to me. 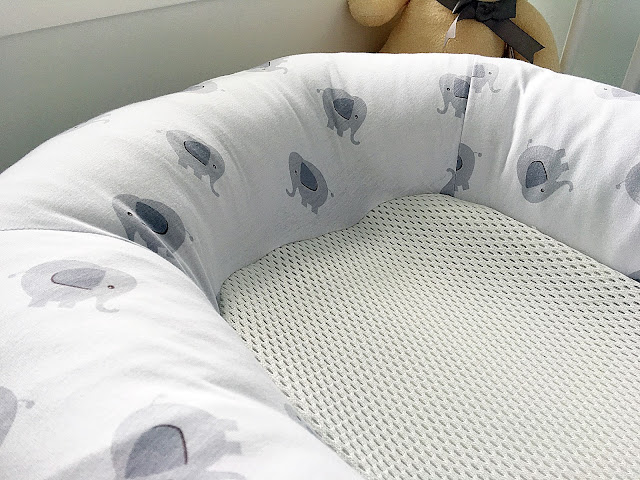 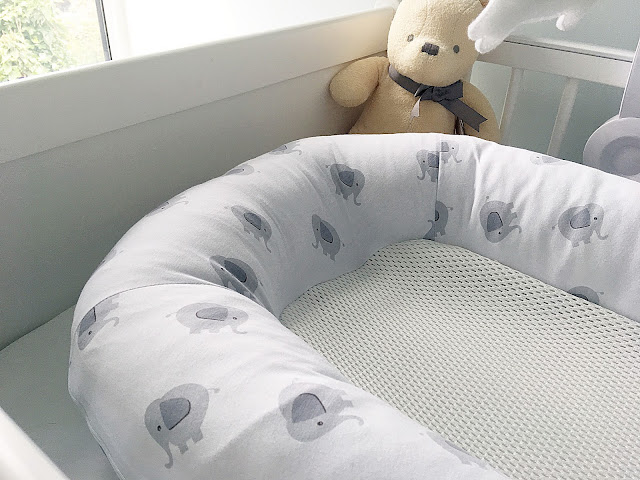 We ended up doing the one thing I never thought I would, and that is co-sleeping. It was literally the only way any of us could get any sleep. It worked an absolute dream! I could lie us both down and feed him whilst we slept. I know they don’t recommend co-sleeping, but I honestly believe if you make sure you do it as safely as possible, then it is whatever works best for you and baby. Teddy was perfectly happy and so was I. However I knew I couldn’t carry on forever and was looking for any solutions I could find to get him to sleep in his crib! I was tempted to buy the sleepyhead that everyone raves about but after reading some reviews online and seeing lots of comments about how quickly they outgrow them considering how damn expensive they are, I just couldn’t warrant paying all that money for something that would last two minutes.
I saw someone on Twitter talking about the Purflo Breathable Nest being a cheaper alternative to the Sleepyhead and it instantly caught my attention. I headed to google and spotted it available on Superdrug for £49.99 and thought it was a bargain compared to the Sleepyhead so instantly picked it up. It is also available at Mothercare & on Amazon, although Superdrug is the cheapest place I have found it so far. The Purflo is designed to have Amicor Pure filling it its bumper as it is naturally breathable and also anti-fungal, anti-bacterial and reduces the risk of dust mites, all of which are known to aggravate infant allergies, such as childhood asthma and eczema.

I didn’t want to do too much too quick at night time so I started by placing him in his nest, inside his crib for 5-10 minutes during the day whilst I was getting ready, brushing my teeth ect and he seemed really happy! One night he fell asleep downstairs (which rarely happens just before bedtime) so we placed him sleeping, in his crib with his nest and he slept for an hour! It may not sound like a lot, but it was definite progress. Baby steps people.

The next night he had his usual big night-time feed 9 until 10, and I placed him in his crib asleep & he lasted three hours before waking up for his first feed! I could have cried I was so happy. Once he had his feed, he wouldn’t go back in his crib so I put him in bed with us, still feeling like we had accomplished something by him doing that first stretch in his nest. The next night we put him in again after his feed and he went from 10pm until 3:30! I kept waking up making sure he was still breathing! After his feed, I waited half an hour to make sure he was in a deep sleep and put him back in his crib where slept until 6am. It’s been that way ever since!! He does two stretches in his crib and then comes in bed with us for a couple of hours. We will start putting him back in for the third stretch & persevere so he does even longer in his crib. I feel like we’ve made some amazing progress though! 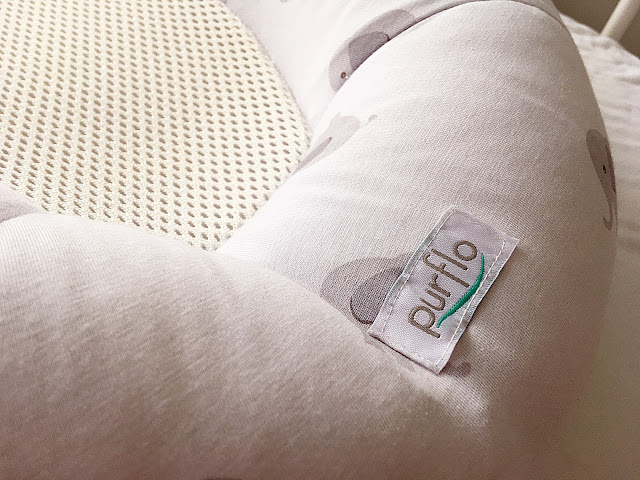 I was really worried that we had ‘made a rod for our own back’, as people kept telling me *eye roll*, but we’ve managed to crack it ourselves and we still got to enjoy 6 or 7 weeks of co-sleeping, which some nights I do really miss! I’m so glad we opted for the Purflo rather than the Sleepyhead as it’s more breathable and I feel a lot happier knowing that if he ever DID roll onto his tummy when he gets bigger, he can still breathe through the small anti-bacterial 3D mesh. I absolutely loved co-sleeping and can see us doing it with our next baby as well, it made those first few weeks so much easier.

I honestly can’t recommend these enough! I still think we’d be co-sleeping all night if we hadn’t picked up the Purflo. When Teddy is bigger and goes in his own room with his cot-bed, we will transfer his nest into there, so he has something similar and feels really snug and secure. I dread the day he outgrows it and I really hope that the people at Purflo bring out a larger option!

Did you co-sleep with your baby? What do you use to help your baby get a better nights sleep?

Throwback to our Cornwall trip last year. I need a