I’ve always been quite a laid back, chilled out kinda gal’ but since having Teddy there are some things that really grip my shit. My rage can vary depending on the situation and it ranges anywhere from “if I roll my eyes any harder they are gonna cause me some serious damage” to “I will drop you & run your head over repeatedly with Teddy’s pram”. I thought I would share five types of people that I hate now i’m a parent.

This goes hand in hand with the last pet peeve but the amount of times I’ve shared something about Teddy & people jump in with their “advice”. I wasn’t asking for advice, I didn’t need the advice & I sure as shit don’t want it. I don’t mind a friendly ‘oh we tried this & it helped’ i’m all for that. It’s the people throwing their two cents worth in on something that I don’t see as an issue. E.g. co-sleeping or feeding on demand. I don’t see either of those as an issue so it gets my back up when people offer their ‘advice’ on how to stop it.

Why do people think that it is acceptable to have their grubby hands all over your child? We were at a Christmas party recently and some woman I have never met held Teddy’s hand & then started kissing it. “Excuse me, I don’t know where that mouth has been & you’ve just smothered your filthy ass germs all over his tiny hand!”

Nothing annoys me more than people who get in lifts that don’t need to! I know there is the whole ‘not all disabilities are visable’ yada-yada, I get that but some people really do take the fucking biscuit. In our local shopping centre we were once waiting 25 minutes for the lift, purely for the fact that people who were capable of walking were getting in them. We had to park on the roof level so we would have had to walk down….SIX flights of stairs with a baby & his pram, to get to the shops. Eventually the manager came out and made people (who could) walk instead. ON YA FUCKING BIKE KIDS!

You know those people? If you’ve been to Tenerife, then they’ve been to Eleven-erife? Yeah. Them. “Oh, is Teddy not sleeping through the night? my brilliantly advanced, clever child has been doing it since he was six hours old…” Yeah, but your child looks like the back end of a filthy rhino, so i’ll take the not sleeping thanks.

I have also asked some other Mama’s to share their parental pet peeves:

“When people disrespect you around the kids like saying “oh does your mum not let you do that, that’s not fair” or like when you are maybe implementing a new thing like not letting your child have something so they stop having a tantrum for it so much then they just let them do it anyway like why can you not respect my parenting at all?!” DEAR MUMMY BEAR

“My son’s only 9 weeks, but so far…people interacting/touching him without my permission! It’s cold season and so far two *random* people have touched his hands/face. Going to grab their hand next time, see how they like it!” PICNIC COPY
“People who park in parent & child spaces when they DON’T have a child!” NOT YOUR AVERAGE
“When people assume your child is one gender purely on what colour they are dressed in. Not all girls wear pink and not all boys wear blue!” MUMMY CAT NOTES

“People not understanding that my plans can change at the drop of a hat because being a mother will ALWAYS come first.” LIFE-MILK

“Mother-In-Law not following toddlers routine when looking after him and my Mum constantly telling me the baby’s hands are cold!” RACHAEL1786

“When you say something and people dismiss it straight away eg. *Baby cries* Me: Oh he’s probably tired I’m going to put him to nap.. Ignoramus: No he’s not! Ignoramus: *shushes an increasingly loud and overtures baby*Ignoramus: ….I think he’s tiredMe: *eyes roll out of head*” THE SAUSAGE ROLL CHRONICLES 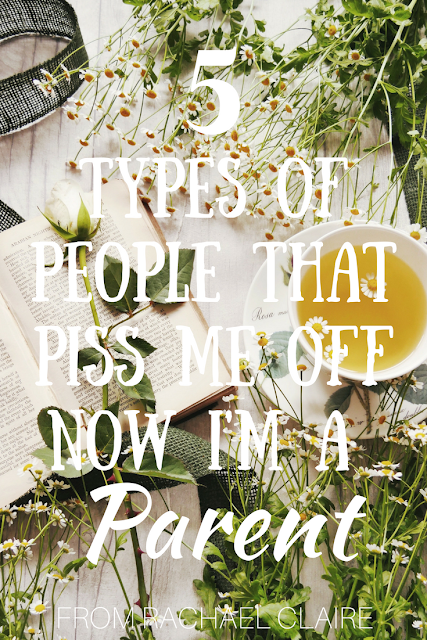