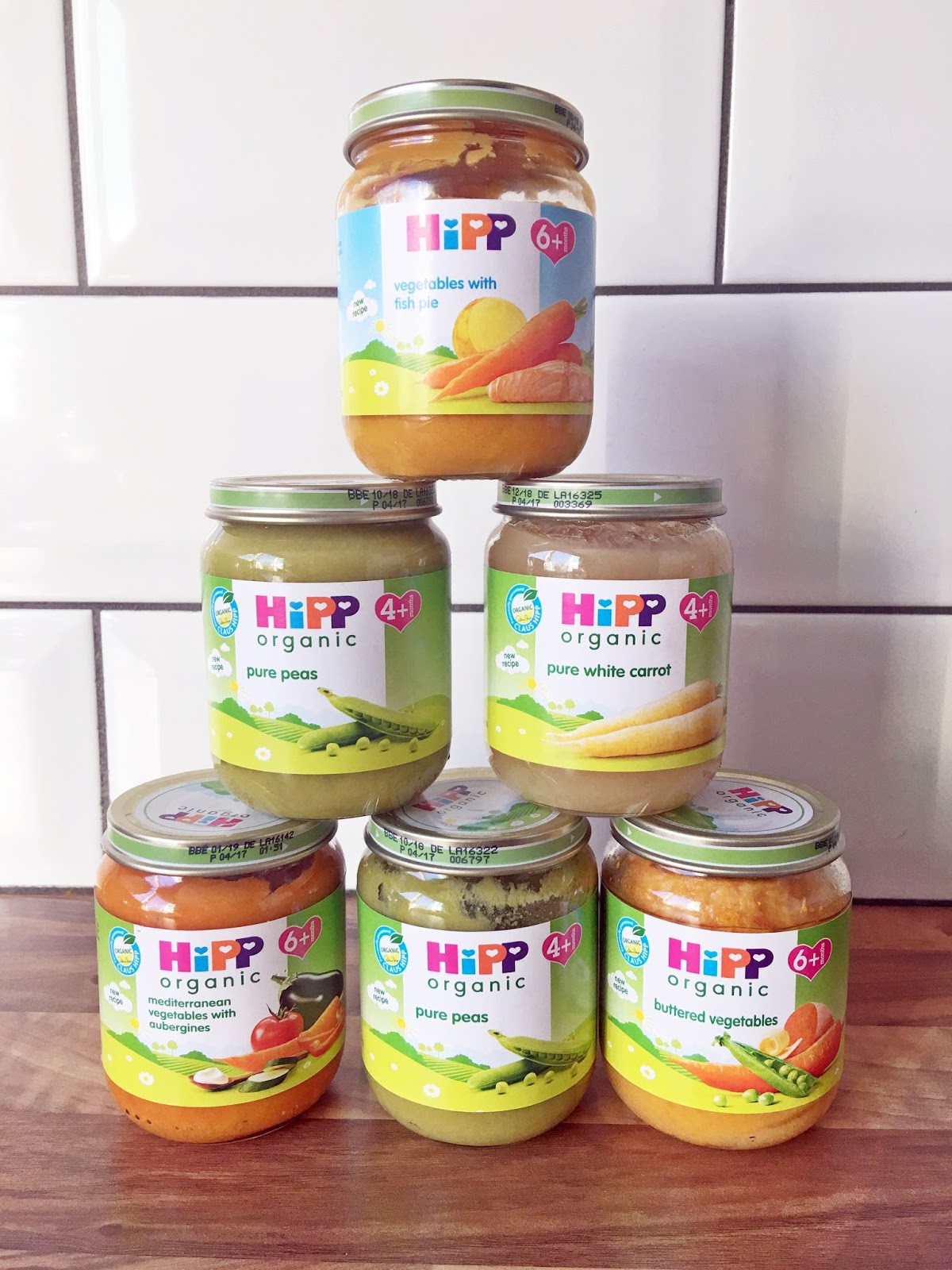 We have officially started our weaning journey! I say ours, it’s essentially Teddy. I knew when I was pregnant that I wanted to take the baby led weaning approach and I did some research into it, also my Sister used the method with her two youngest and it worked out really well. As Teddy got older and we started getting closer & closer to him being six months old, I started looking for tips and recipes online (Pinterest is a brilliant source for delicious meal & snack ideas). We have tried a couple of things so far; porridge, curry, pasta & homemade meatballs and also some of the Ella’s Kitchen organic finger foods. HiPP Organic also kindly sent over some of their brand new range made especially for baby’s first tastes. They sent over a stunning hamper filled with their pure vegetable jars and stage 1 savoury jars. As we are doing BLW we are using the jars as a way for him to practice feeding himself & also we mixed the yummy savoury jars with pasta, to use as a pasta sauce.

We are really lucky that Teddy is really into his food and where as he still may not be eating much of it, he’s giving everything a good try and really loves feeling all the different textures. He’s such an inquisitive babe. It’s so hard to know what is right when it comes to weaning and to be honest, I thought it would be much easier than it is. It definitely isn’t a quick process. I also spend the whole time he is eating, on the edge of my seat arse sweating, with the fear he is going to choke!

WHAT IS BABY LED WEANING?

Baby Led Weaning is just a fancy way of saying ‘letting my baby feed themselves’. You cut their food up into manageable finger sized lengths and offer it. The difference between baby led weaning and traditional weaning is the fact that with purees, babies learn to swallow and THEN to chew. Where as with baby led, they learn to chew first.

The pure vegetable jars make it easier for babies to get a single taste for a food and always with the brand it is made using only organic ingredients so you know that your little one is getting the freshest and healthiest food. I am really keen on making sure that Teddy has a healthy balanced diet. Babies are born with a sweet tooth so if you introduce them to sweet things really early on, it can be hard to get them used to savoury foods. The new jars also now have a wider opening making it a lot easier to feed baby and they are also 100% recyclable! For more information on the new recipes and products from HiPP Organic and for the best weaning advice, head over to the HiPP UK website. 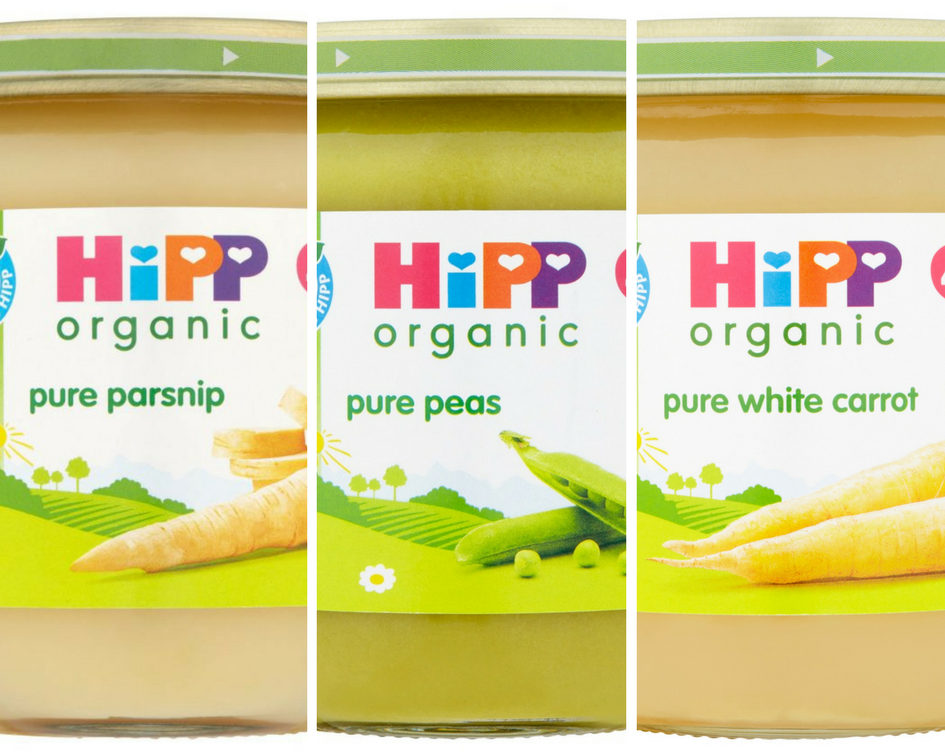 Teddy was sent three varieties of the Pure Vegetable range including; Pure Parsnip, Pure Peas & Pure White Carrot. These jars are suitable for babies from 4 months+ (babies shouldn’t be weaned before six months without consulting your doctor or health visitor first) so the texture is a lot more runny. I did pre-loaded spoons with these and put them on Teddy’s high chair. He would then pick them up and attempt to put them in his mouth. Although the majority ended up on his face and splattered on the high chair, he did really enjoy trying the new flavours. His favourite was definitely the Pure Peas!
I would never give anything to Teddy that I wouldn’t at least try myself, so when HiPP asked if I would be willing to try the jars as well, I was more than willing. I was actually pleasantly surprised by the Pure Vegetables as I wasn’t sure what to expect from a jar essentially just made up of one vegetable. However I found that the Pure Peas & Pure Parsnip literally smelt exactly like the ingredient they are made from. The consistency of the peas was a little thicker than the parsnip so he managed to get a lot more on his spoon and get it to his mouth without losing lots, which is why I think he enjoyed it the most. The only one I wasn’t too sure of was the pure white carrot jar, it didn’t actually smell or taste of carrot at all although I’m not sure if that is because it’s different to the kind of carrot i’m used to. Teddy wasn’t so keen on that one either and just used it to splash it and smear over his highchair tray. Weaning is messy, that’s for sure! 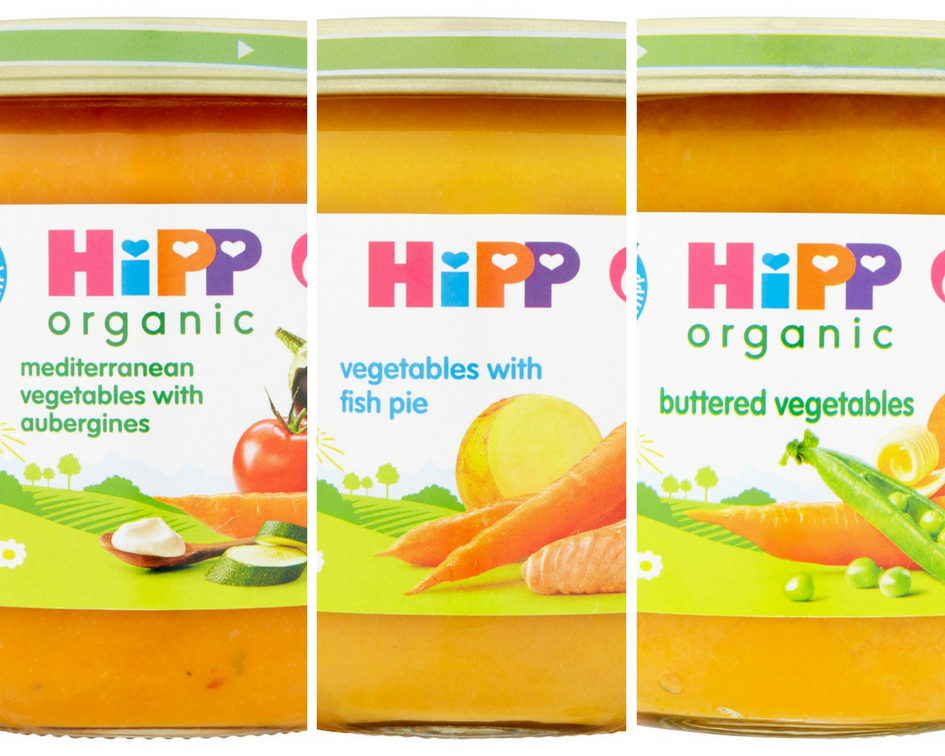 Now these jars I was REALLY looking forward to, as soon as I saw them I couldn’t wait for Teddy to have a try and see what he thought. These jars are made for babies aged 6m+ and are slightly thicker in texture and contain a mixture of ingredients so your baby can really have a good taste of a variety of healthy foods. The Mediterranean Vegetables with Aubergines smells so nice & just like a fresh pasta sauce, which is why I mixed this with some twirly pasta (it’s easier for his little hands to grip and the swirls give it more hold when it’s slimy). He LOVED it, I also gave him some of the jar to try on its own in a little bowl with a preloaded spoon and eventually he was just putting his hands in and giving it a try that way!
As soon as I opened the Vegetables with Fish Pie I knew straight away what it was without even looking at the label, it smells exactly like you would imagine. I have to admit I am not a fan of fish pie at the best of times but I am determined that I won’t let my preferences and dislikes, affect how Teddy eats. Which is a good job because he really enjoyed it! He wasn’t so sure after the first spoonful and did turn his nose up at first but after a little while he tried a little bit more, then a little bit more and before I knew it, it was everywhere. Even splattered on the wall behind him!

The Buttered Vegetables was definitely both of our least favourite, he wouldn’t even entertain it. He tried one mouthful, spat it out and refused to try it again. I did try him with it again later in the day but, again, he wouldn’t have it. I have to admit that after trying it myself, I didn’t blame him. It is definitely on the more textured side, with little lumps of vegetables so perfect for you to use if you want to gradually introduce your baby to lumps and textures, rather than going straight in at the Baby Led Weaning route. 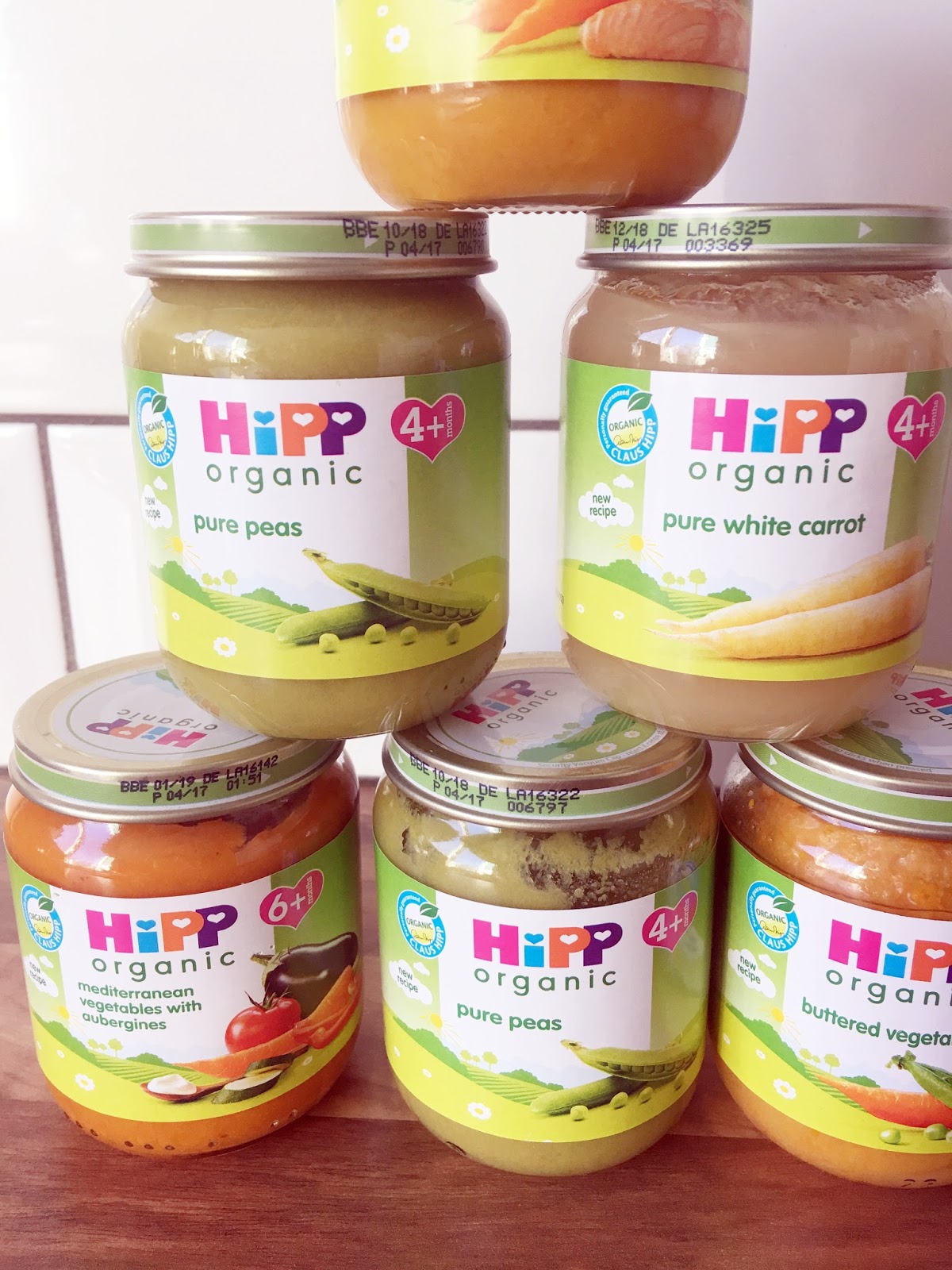 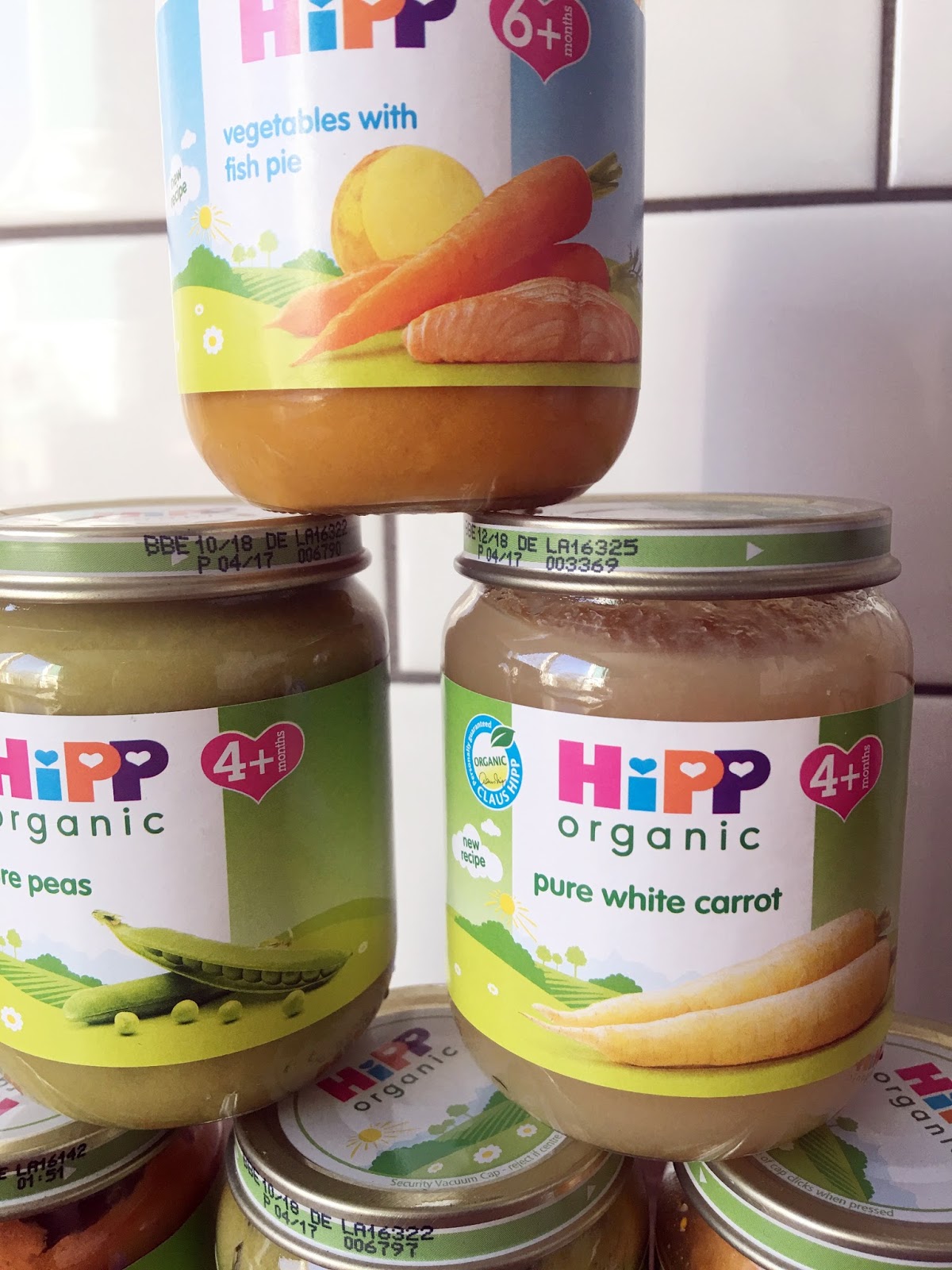 Overall Teddy (and myself) really enjoyed the jars and think they are perfect for parents who are planning on doing spoon-fed and puree foods. You can rest easy knowing that you are giving your babe the healthiest and most nutritional ingredients. I’d highly recommend HiPP Organic as a brand and these jars are certain to be a hit!

The lovely people at HiPP have also given me a code for all my lovely readers, for an exclusive money off coupon! All you have to do is click the link here (http://bit.ly/FromRachaelClaire_HiPPVoucher ) and print off the voucher.
Have you started weaning yet? What is your baby’s favourite food to have? Have you tried anything from the HiPP Organic brand? I’d love to know. It’s such an exciting time!
*I am part of the HiPP Moments Team and was sent this hamper of HiPP Organics jars to try and also give an honest review. All opinions are my own!