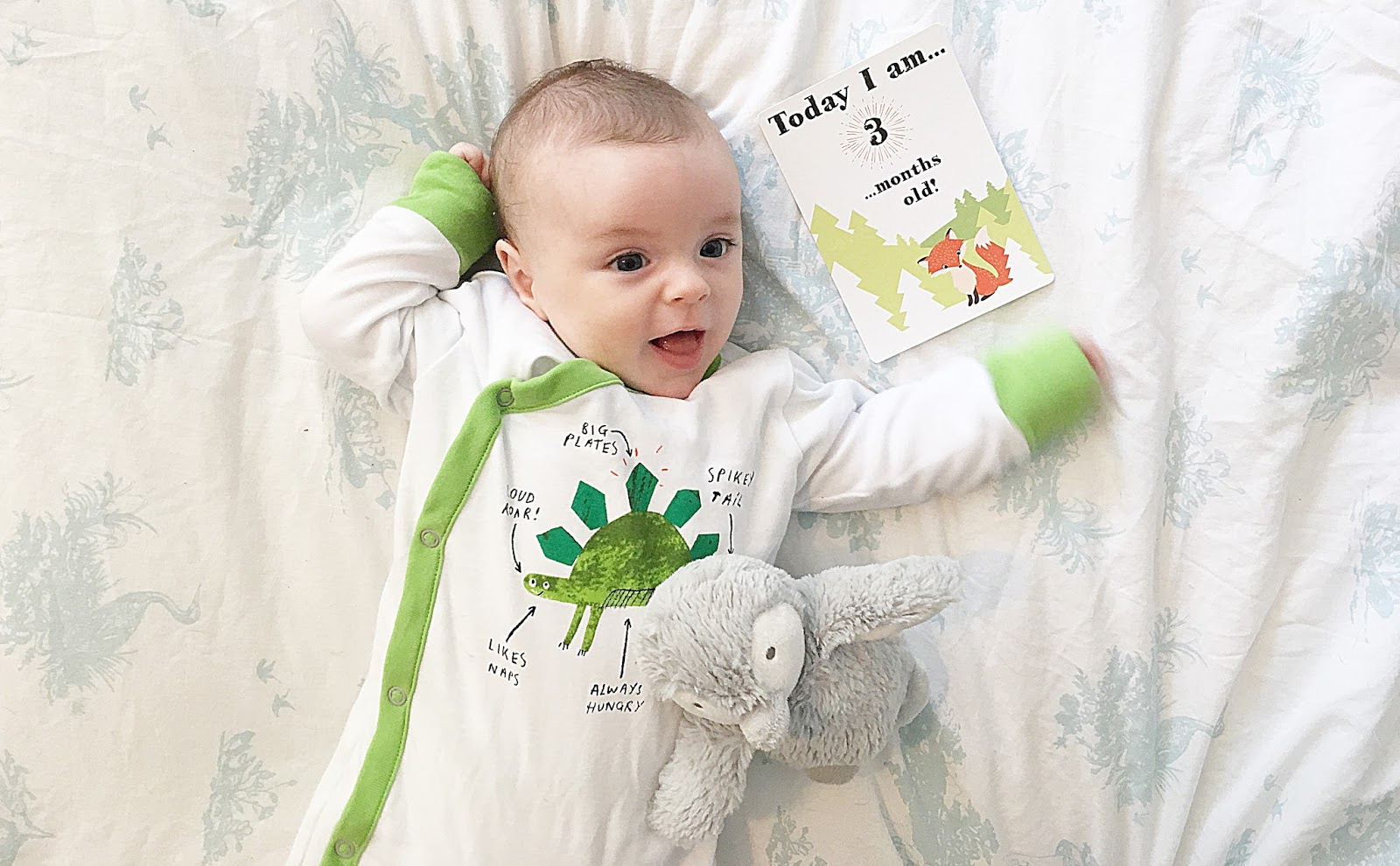 I can’t believe I have a three month old! I honestly can’t get over how quickly time goes when you have a baby. I am so glad I take pictures everyday because blink, and you miss something. I always find myself spending five or ten minutes every night looking back through all his pictures and forgetting he was ever as small as he was, when he was born.

I feel like Teddy has grown so much over the past four weeks. He enjoys babbling to himself and telling us little stories, especially in a morning! He loves having little conversations with us where we chat back-and-forth. He is such a morning person, always wakes up with a smile. He has finally started lifting his head up during tummy time, not for as long as he does when being held, but he doesn’t hate it as much as he used to. When we hold him he can hold his neck up so well and even the Health Visitor commented on how strong and sturdy he is, holding his head up. He grasps his dangly toys on his play gym, and especially enjoys any toys that are musical.

I am still exclusively breastfeeding although he has had one bottle over the past four weeks, because I went out for the first time WITHOUT him. I know shock horror, I actually met up with my best friend for dinner at Gourmet Burger Kitchen, YUM, and actually managed to eat with both hands and whilst it was hot! Meals like that are few and far between with a baby. He had a Daddy, Teddy day where they went out for coffee and some dinner. He was extremely well behaved and took his bottle like a trooper, which I was a little worried about as he hasn’t had a bottle in about 4 weeks so I thought he might kick off. It would appear that as long as he is getting Mummy’s milk, he isn’t bothered who it comes from! I am still expressing once a day using my Medela Swing Electric Breast Pump , which I love by the way and can’t recommend enough! I store the milk until I’ve collected around 6oz and then put it into my Lansinoh Breastmilk Storage Bags , and then pop them in the freezer. I am still absolutely loving breastfeeding and feel really lucky that I am still able to do it with ease. Don’t get me wrong, waking up bog-eyed in the middle of the night is hard work, but when he gives me a sleepy little smile when i’m latching him on, I soon forgive him.

Three Months.. ?- – Three months with my little boob monster. We have celebrated today by going swimming with Daddy and then going getting weighed, my chunky monkey now weighs 13lb 11oz! Mummy’s milk is still working it’s magic ??? I love you so so much little man. ??
A post shared by Rachael.25.?? (@fromrachael_claire) on Aug 15, 2017 at 8:40am PDT

Since our last update we have taken Teddy swimming twice and he loved it. We go to a leisure centre a couple of towns over, as the small pool is really heated, so perfect for babies. They have a parent and toddler session everyday Monday-Friday, so we are hoping to take him a lot more. We have also booked our first family holiday abroad, next July, YAY. We are going to Halkidiki, the Greek island, for 11 nights and i’m so excited. Don’t get me wrong, I know it is going to be a whole other experience with a 15 month in tow, but I can’t wait to travel with him and experience new places as a family.
He has also had his twelve week jabs, but he was absolutely fine, cried for 0.5 seconds and that was it! The first lot of jabs gave him a slight temperature but with the help of some calpol that soon eased off. 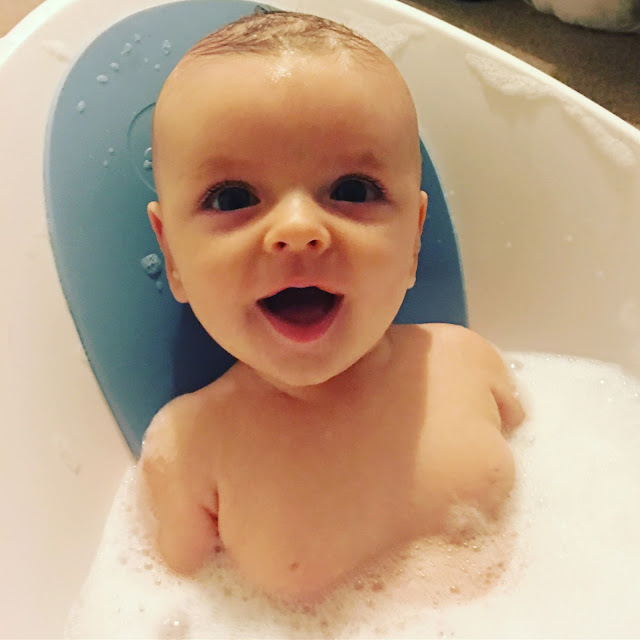 Feeding:
Still exclusively breastfeeding! We got him weighed on the day he turned three months old and he is currently 13lb 11oz, staying in the 50th percentile. Woohoo!
Sleeping:
He now sleeps 10-3/3:30 in his crib, feeds for around half an hour and then goes back down until 5:30, where he then comes in bed with us until around 8ish. I have done a blog post on how we finally cracked putting him down in his crib instead of co-sleeping all night long.
Teddy Loves:
Sucking his thumb! He has just discovered that his thumbs do actually belong to him and he has used them to settle a couple of times.
Teddy Hates:
Getting dressed after his bath! I’m not exaggerating when I say he loves being naked. He loves his bath, enjoys some baby massage and then as soon as you start getting him dressed, next door must think we’re torturing him! He’ll scream bloody murder until he’s fully dressed and on the boob, then you won’t hear a peep.
When the Health Visitor came last week she mentioned weaning and how we are planning on introducing him to foods! I can’t believe we will soon have to start thinking about that, we won’t be introducing them until six months but i’m sure it’ll be here before we know it! We are planning on doing Baby Led Weaning so if you have any advice or book recommendations, that would be brilliant!